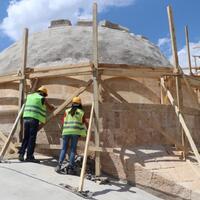 Cacabey Madrasah, the world’s first astronomy school, gets a makeover

The Cacabey Astronomy Madrasah, which is on the UNESCO World Heritage Tentative List in the Central Anatolian province of Kırşehir, is currently being restored.

Madrassah Cacabey was built between 1271 and 1272 during the Seljuk era by Nureddin Cibril bin Caca Bey, the Emir of Kırşehir, as a school of astronomy to observe space, the first of its kind in the world.

It was transformed into a mosque in 1907. Restoration work on the historic structure began in 2019 to protect it against the risks of humidity and humidity.

The first phase of restoration work has already been completed, and the second phase has been underway for over 5 months now.

A team of experts from the General Directorate of Foundations, made up of architects, engineers and art historians, is taking part in the restoration, the cost of which is estimated at around 18 million Turkish liras.

Experts pay special attention to the observation pit and the columns, which look like rockets. They use a special industrial mixture, which does not contain cement, to place stone blocks on the dome of the structure.

“The problem was that during the previous restoration works, the dome and the vaults were covered with cement. Since then, water has penetrated the structure and the teams again used cement to stop the leak which actually caused the salinization,” said Utku Yücel, an architect on the team.

Deep fractures became apparent on the structure when they removed the layers of cement, he added. “That’s why we had to strengthen the structure first.

Other team members do very fine and careful work with equipment, which is normally used by dentists, to clean the interior, Yücel explained.

Some 60 people work around the clock, he said.

“We are digging into history here, so we have to be very careful. We are overjoyed when we find out something.

The General Directorate of Foundations said in a statement that the authority had consulted specialists before the restoration
work has started.

Civil engineers inspected the structure, samples were taken from all the walls for assessments and the desalination work alone took two years, he said, adding that experts including academics, participate in ongoing efforts.