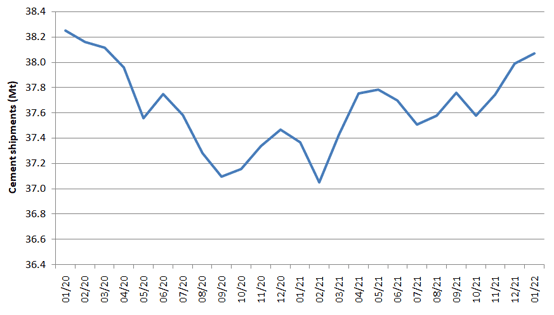 Cement shortages were reported in the US media last week in Alabama and South Carolina. The owner of a ready-mix concrete supplier in South Carolina blamed it on labor and supply shortages. Dan Crosby, the chairman of Metrocon, told Fox News that his company could only take on 60% of the work it could normally handle due to the problem despite the state’s growing construction demand.. Meanwhile, the Alabama Concrete Industries Association said its home state saw a 14% increase in demand for concrete in 2021, but a cement shortage could cause project delays.. The association also blamed labor and supply issues. He pointed out that the high demand for concrete during the winter prevented the build-up of stocks, then the annual maintenance interruptions of the cement plant in the spring added to the problems. Once the contractors effectively secured their cement supplies, they faced further delays due to a nationwide shortage of truck drivers!

Data from the United States Geological Survey (USGS) does not particularly shed light on the situation in Alabama and South Carolina. Alabama was the nation’s fifth-largest cement-producing state in January 2022, but that’s no surprise since it’s the state with the fifth-largest cement-producing capacity. Rolling annual data on Portland and blended cement shipments by origin show the effects of the coronavirus outbreak in the South from early 2020 to January 2022. Shipments plunged in 2020, then mostly recovered in 2021 However, Alabama, Kentucky and Tennessee saw shipments drop from 7.1 Mt before the pandemic to 7.6 Mt in January 2022. South Carolina shipments fell from 3 Mt to 3.2 Mt. Regionally, the Northeast saw a similar trend although, unlike the South, shipments exceeded those of early 2020. The Midwest and West were different with a general upward trend on both years, although the West has slowed slightly from mid-2021 onwards. Overall, the United States as a whole saw increased shipments throughout this period.

Ed Sullivan of the Portland Cement Association (PCA) told the May 2022 issue of Global Cement Magazine that the U.S. cement sector performed well in 2021 with a 4.1% year-on-year sales increase to 104 Mt. However, he flagged supply chain issues that actually slowed growth, due to a lack of staff.

The other point along these lines that Sullivan made was that cement imports may not necessarily be able to offset domestic supply issues due to global post-coronavirus shipping demand. USGS data puts imports into the United States at 13.7 Mt in 2019 from 16.3 Mt in 2021. Notably, Cemex restarted a production line in 2021 at its CPN cement plant in the state of Sonora in Mexico to export cement to the western United States. In March 2022, he added that he would also restart another line at the plant. It’s not the only one though, as GCC reported in January 2022 that a line from one of its factories in Chihuahua, Mexico was exporting cement to Texas. Sullivan felt that January 2022 was “weak” but was followed by an “extremely strong” February 2022. its rate of growth in global sales and profits. CRH recorded strong demand in the central and southern regions.

As the U.S. economy rebounded from the peak of the first coronavirus waves in 2020, various supply chain issues have surfaced. Shortage of staff is a problem that can also aggravate other logistical problems. The south seems particularly vulnerable to all of this because it is both the country’s largest cement market and because demand has held up. In January 2022, a study by the International Monetary Fund (IMF) identified several reasons for staff shortages in the United States and the United Kingdom. These included increased inactivity among older workers, the so-called “She-cession” (where female employment has fallen too much due to coronavirus trends) and changing worker preferences amid high demand for labour.

Labor shortages are expected to ease through 2022, but the favorable outlook for cement demand in the United States is offset by inflationary pressures. The persistently weak workforce could further contribute to rising inflation. The US cement sector may be doing well right now, but even success comes with risks.

Global Cement Robert McCaffrey will give a keynote presentation at the IEEE-PCA Cement Conference in Las Vegas on Tuesday, May 3, 2022. The May 2022 issue of Global Cement Magazinefeaturing interviews with PCA Managing Director Mike Ireland and Chief Economist Ed Sullivan, is available to download now.