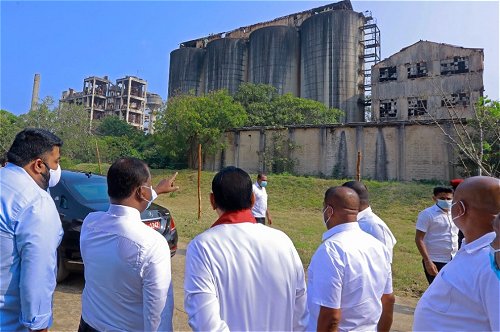 March 20, Colombo: Prime Minister Mahinda Rajapaksa on Sunday (20) paid an inspection visit to the Kankesanthurai cement factory belonging to the Sri Lanka Cement Corporation which was closed due to the war.

The Kankesanthurai cement factory, established in 1950, was closed in 1990 due to the LTTE terrorist war. Although the factory has an area of ​​728 acres, most of the area is now settled.

According to a Cabinet decision taken on 08 February 2021, it was decided to demolish other buildings leaving only the usable buildings of Kankesanthurai Cement Plant for future development activities.

It was revealed that about 80% of the affected buildings can be renovated and used. The government aims to rebuild the Kankesanthurai cement plant using these resources as well.

The Secretary of Ministry of Buddha Sasana, Professor Kapila Gunawardena of Religious and Cultural Affairs were also present on the occasion.