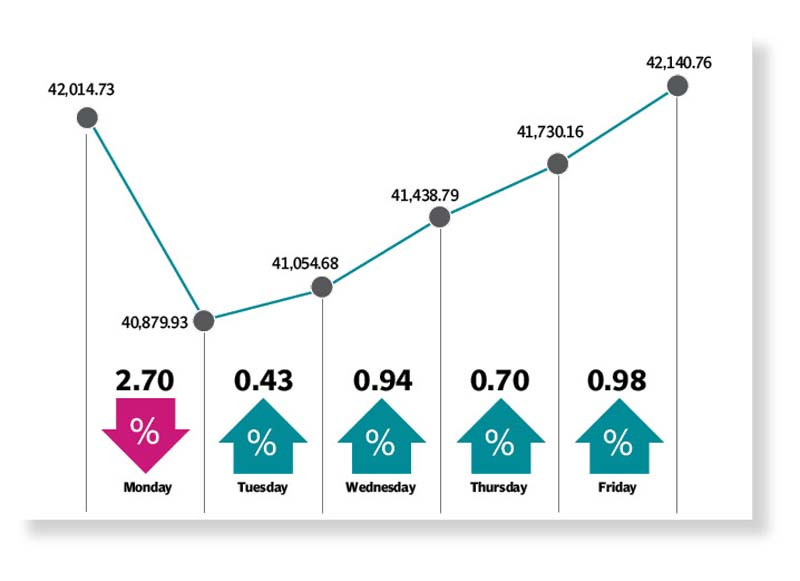 Stocks stagnate on a mix of positive and negative news

The Pakistan Stock Exchange opened the week on a negative note, witnessing a bloodbath over the International Monetary Fund’s (IMF) dissatisfaction with the federal budget for 2022-23. As a result, the market plunged 1,135 points overnight.

However, positivity was seen in the stock market later and the KSE-100 index gained ground on speculation of Pakistan’s removal from the FATF gray list.

Still, many investors preferred to sit on the sidelines amid concerns over the IMF program relaunch. Investors lost hope again in the face of the continued depreciation of the rupee.

The Pakistani rupee continued to decline throughout the week against the US dollar, hitting an all-time low at around 208 while the SBP’s foreign exchange reserves fell to $8.99 billion.

Later, positive investor sentiment helped pull the KSE index into the green zone as the government took measures such as higher oil prices to complete the IMF deal.

In addition, the government approved an increase in electricity prices of Rs 7 per unit in phases to meet the IMF’s request, which has stimulated investor interest.

Investors remained bullish on news that China would agree to rollover loans worth $2.3 billion and provide additional aid of $2.5 billion to $2.8 billion. , which pushed the index up.

The positive announcement of Pakistan’s removal from the FATF gray list boosted the market. The bulls launched the index above 42,000 points to end the week in the green zone.

Arif Habib Limited, in its report, said the market opened on a negative note amid concerns over the IMF’s expressed dissatisfaction with the measures taken in the federal budget for 2022-23, whereby the market plunged 1,135 points overnight. .

After the bloodbath, market sentiment turned positive in expectation of Pakistan’s exclusion from the FATF gray list.

In addition, the government increased the prices of MS and HSD by Rs24.03/litre and Rs59.16/litre respectively, while eliminating the remaining subsidies completely, fulfilling one of the key IMF conditions.

However, the Pakistani Rupee continued to fall throughout the week against the US Dollar, closing at Rs208.

On the other hand, the sectors that contributed negatively are commercial banks (263 points), chemicals (34 points) and technology (33 points).

Overseas sales were seen during the week, which amounted to $1.91 million, compared to a net sale of $0.42 million last week.

Significant sales were seen in banks ($1.4 million) and fertilizers ($1.1 million).

On the local front, purchases were reported by businesses ($10.5 million) followed by individuals ($5.8 million).

Among other important news, Nepra authorized a tariff hike of Rs 1.55/unit for DISCOs, textile exports jumped 28.6% in July-May, the OGDC discovered gas in Sindh and, in July-April, the banks disbursed more than Rs 1 tr of agricultural credit.

Topline Securities, in its report, said the KSE-100 index closed flat on a weekly basis.

The week started on a negative note on the news feed that the IMF had expressed concern over the recently announced FY23 budget. rise in petroleum product prices, news that the government was revising personal income tax rates to bring them in line with the IMF’s request, and the Economic Coordination Committee’s approval to raise electricity prices by 13 rupees. /unit in phases as requested by the IMF, Topline added.

At the end of the past week, the expectation of positive news due to the FATF review also boosted the market.

The average daily volume and value traded during the week was 174 million shares (up 2.5% based on WoW) and 5.3 billion rupees (up 20% based on WoW) respectively.

On the flow side, companies and individuals bought stocks with a net worth of $10.2 million and $3.7 million respectively, while insurance, mutual funds and brokers sold shares worth $8.92 million, $8.81 million, and $6.3 million, respectively.

67-year-old woman on motorcycle killed after accident near cement plant in Victorville – VVNG.com