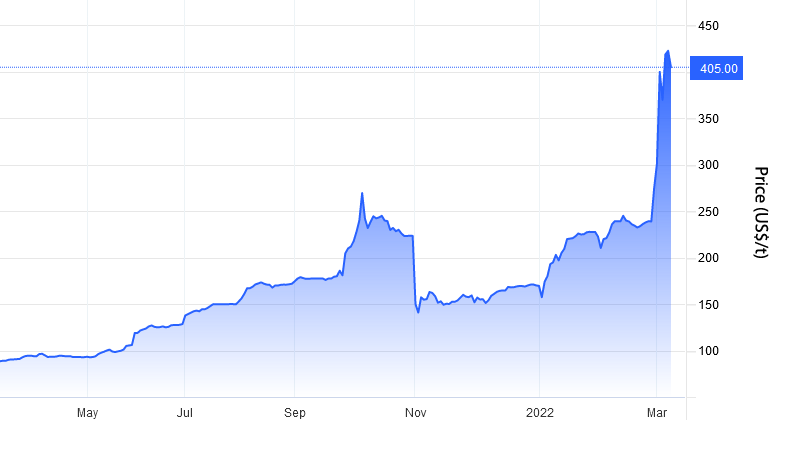 Volkan Bozay of Türkçimento took to the airwaves last week to raise the problems the war in Ukraine is causing for Turkey-based cement producers. The head of Turkey’s Cement Manufacturers Association told local Bloomberg HT that the dramatic rise in Newcastle coal prices posed a serious threat to the sector.. The price jumped nearly USD 100/t in a single day in early March 2022. Bozay said the cost of cement from a plant using imported coal would consequently increase by around USD 15/t. He added that members of the association have an average of 15 to 20 days of charcoal stocks.

In a separate press release, Türkçimento revealed that Turkey as a whole imported around $1.5 billion of coal from Russia in 2021. The cement industry imported around 5 Mt of coal in 2021, from all sources, although the majority comes from Russia. Coal shipments from Russia since the start of the war have been reported as “very limited, if not impossible”. It was further explained that each increase of US$10/t in the price of coal increased the plant’s production costs by US$1.5/t of cement.

Naturally, Bozay’s appearance on a newscast had a lobbying aspect to it. He called for the relaxation of government import standards – such as sulfur levels, lower calorific values ​​and volatile matter limits – to allow coal to be imported more freely from sources such as Colombia, the United States and the United States. Indonesia and South Africa. There has also been a push to let in more alternative fuels such as tires and waste-derived fuels. What Bozay didn’t mention was how many of his members had long-term coal supply contracts in place to cushion them, at least against short-term price inflation. Yet if coal shipments from Russia have simply ceased, the price no longer matters. A cement kiln configured to run on coal shuts down when it runs out of stock.

Turkey was the world’s fifth largest cement producer in 2021 according to the United States Geological Survey (USGS). Türkçimento data shows that in 2020 it exported 145,000 t of cement to Russia by sea. In total, it exported 16.3 Mt of cement and 13.5 Mt of clinker. The United States, Israel, Syria, Haiti and Libya were the main destinations for the cement. Notably, Ukraine was the sixth-largest recipient of cement, with 752,000 t imported, although anti-dumping legislation introduced in mid-2021 looked set to reduce it until the start of the war. Ghana, Ivory Coast, Guinea, Cameroon and Belgium were the main recipients of clinker. Cumulative cement exports for the year to October 2021 were up 3% year-on-year compared to the first 10 months of 2020. Clinker exports, however, were down 27%. Overall domestic production and sales in Turkey increased by 9.5%, suggesting an estimated production figure of 79 Mt for 2021.

Other fallout in the cement sector from the war in Ukraine this week included Irish company CRH’s decision to exit the Russian market. It entered the region in 1998 through a subsidiary based in Finland and operated seven ready-mixed concrete plants through its joint venture LujaBetomix. CRH says all operations in Russia have now ceased. In 2021, it sold its lime business in Russia, Fels Izvest, to the Russian company Bonolit. Although selling concrete batching plants is not trivial, they are much cheaper assets than clinker production lines. The German company HeidelbergCement, the Italian company Buzzi Unicem and the Swiss company Holcim each operate at least one integrated cement plant in Russia. So far, these companies have publicly expressed their dismay at the unfolding humanitarian crisis in Ukraine and have made donations to the Red Cross.

Finally, another surprise this week was the fall in the European Union’s (EU) Emissions Trading System (ETS) carbon price, which fell from a high of 96 euros/t at the beginning of February 2022 at 58 euros/t on March 7, 2022. As other commentators have stated, one normally expects the price of carbon to follow the energy market, but that has not happened.. Instead, investors pulled back, perhaps to maintain liquidity for other markets.

As the US moves to ban Russian oil, gas and coal imports and phase-outs to varying degrees promised by the UK and EU in 2022, we can expect more turbulence. on the energy markets in the coming days. As the Turkish example above shows, all of this can…and will…effect cement production.