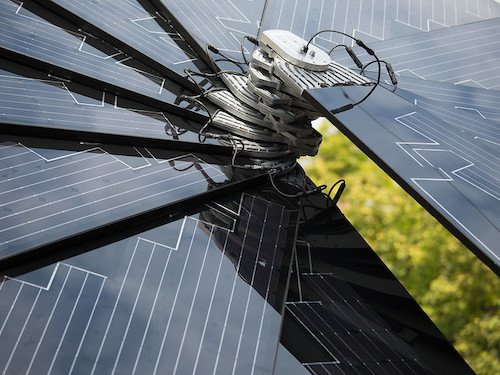 A different kind of flower energy – a flower-shaped solar microgrid, to be precise – is poised to power a Saskatoon high school and inspire its students.

“Organizers say the solar flower microgrid powering the Academy of Health and Sciences at Bishop James Mahoney High School is the first of its kind in Canada,” CBC News reports.

A five-meter-tall confabulation of cement, metal and silicon, the aptly named Smartflower reacts to its surroundings much like its namesake (or most of them): opening up during the day and closing at night. “It is also able to detect high winds and will close for protection,” notes CBC.

Ready to be incorporated into the school’s curriculum over the coming year, the Smartflower will fuel students’ imaginative understanding of everything from physics and botany to potential career paths, while providing inspiration. energy at their school.

The project was made possible by a one-time investment from the Government of Saskatchewan and has already got students thinking about “careers they never knew existed,” says CBC.

“I think when you have something like this Smartflower to start the conversation, it starts to inspire students to think beyond the typical choices for post-secondary careers,” said Andrea Regier, program manager at the academy.

“It’s literally groundbreaking, you know, in a lot of ways. And it’s exciting. Certainly stimulating… Pun meant there.